Co-working spaces can be stale and inelegant. Not WeWork. Co-founders Adam Neumann and Miguel McKelvey have raised $3.69 billion since starting the company in 2010, Crunchbase reports. Today, there are 153 finely-appointed locations in 36 cities around the globe. Denver's Union Station location—an immaculate space with hardwood flooring, paneled offices and high-tech conference rooms—covers three floors and serves hundreds of professionals.

"WeWork is more than just a place to work. It's a movement toward a new way of working and living," the company says in the brochure you get when touring a facility for the first time.
​
Packs of bagels, bowls of fruit and refrigerators filled with creamer, soda and other assorted refreshments amplify the message. Never-empty pots of coffee and the water cooler offer a steady supply of fuel for the creative professionals you'll find there.

Full-service advantages at a fractional price

Like most of its peers in the co-working market, WeWork offers members space and a suite of services for a monthly fee plus service changes for add-ons such as mail and printing. A custom app for connecting to any of the company's 80,000-plus members promises to set the company apart, but it's not what CollaborateUp CEO Richard Crespin says is the key draw for locating his company's headquarters at a local WeWork office in Washington, D.C.

"We host a fair number of client meetings and we get tons of compliments. People want to come here because it's so different, energizing and fun," says Crespin, who's used WeWork since November 2015.
​
His experience matches what I saw during my recent visit to the Denver Union Station facility. Most of the offices on all three floors were either claimed or occupied by small businesses paying $400 or more for private space. Some residents brought dogs to work. Others had decorated their space as if it was an extension of their home. Still others parked in the common area, sipping coffee and making occasional use of private cubbies made to look like old phone booths for placing private calls.

A day of "hot desking"

For me, writing at the WeWork location in downtown Denver didn't go well until I found my way to one of the open "hot desks," which are first-come, first-served at my location.
​
The problem? Neither the phone booths nor the restaurant booth-style workspaces lining the outer halls of the space were made for working at a computer for long periods. (You'll end up bending your wrists way more than you should.) Getting to a desk with an adjustable chair was all it took for me to find a groove and knock out several good hours of work. Also helping: 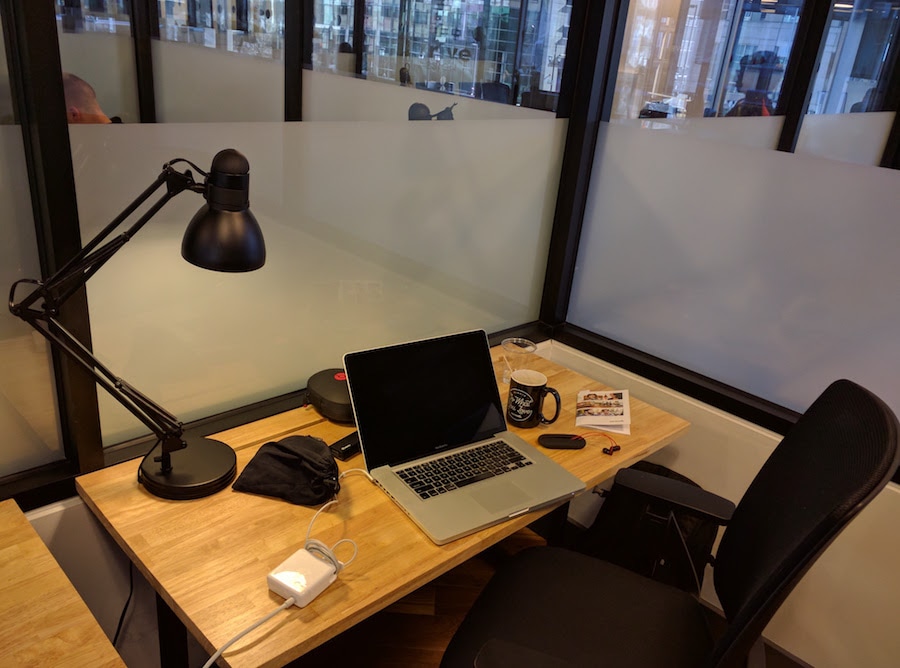 Working at one of the "hot desks" at WeWork's offices in downtown Denver, CO. Photo credit: Tim Beyers.

Verdict: stick with a home office if you can

And yet, I don't see myself signing up for WeWork anytime soon, nor would I recommend the experience for most solopreneurs. Why? The cost of the space, the services, parking and more isn't likely to be worth it—unless your everyday living conditions aren't conducive to a cheaper, work-at-home setup.

Also, as a solopreneur, part of the allure of co-working should be meeting peers and partners. That may be a tough get: the WeWork location I visited hosted only a dozen or so freelancers out of hundreds of residents, most of whom were either with startups or working as part of a remote team for a larger business. For example: Boulder, CO-based Sphero, makers of the adorable BB-8 droid from the new Star Wars series, had a team at the site I visited.

Still, it's hard not to get caught up in the love for the space I saw in the residents there, a feeling Crespin echoes: "We Work is pure delight. My clients and employees love coming here." It's also easy and cheap to try it. WeWork offers a $45 monthly starter membership that includes "credits" to gain access to space once a month and the option to purchase more.

For solopreneurs who have a limited network and need to meet people, or who are pressed for workspace at home, WeWork's starter plan is a cheap and easy way to find out if co-working is the solution you need. For me, 14 years into a long-term career as a solopreneur, with all the infrastructure that comes with that sort of tenure, it's a luxury I'd rather not pay.​

Ready to turn your passion into an income? Get started today!